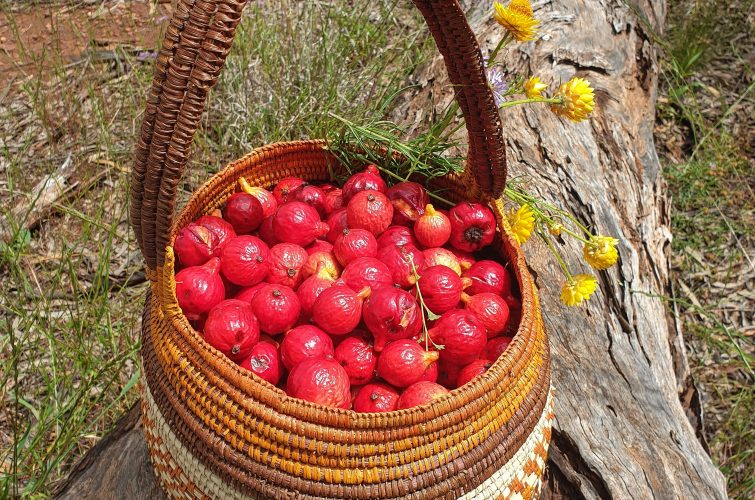 When I turn the calendar to reveal October, my mind turns to Spring foraging.

Santalum acuminatum known as the desert quandong is a small native evergreen Australian tree, growing up to 4 metres high, with rough dark bark and pale green elongated leaves that produce shiny red fruit, commonly known as desert peach or native peach. The fruit was an important food source for Aboriginal people who would eat them fresh or dry.  The fruit when dried can be kept for many years and is an excellent source of Vitamin C, twice that of Oranges.

Where does it grow?

The quandong grows in far-western areas of New South Wales, and wild in Western Australia, Victoria, and South Australia, with smaller numbers of the plant found in Queensland. Feral animals and poor conditions have threatened quandong tree populations which are now into decline in the Northern Territory.

The quandong is hemi-parasitic, meaning it attaches itself to the roots of host plants – including saltbush, bluebush, and acacias – to extract water and vital nutrients. The cream flowers are small, and cup shaped, in clusters at the ends of outer branchlets. The flowers form in late summer and form fruit which is ready for harvest in early to mid-Spring. The ripe fruit is easily picked from the tree, ground fruit can also be picked up and added to your bounty.

The flesh of a mature fruit has a yellow to red colour, dry texture and tart taste. The flavour profile is slightly sour and salty with its sweetness varying significantly between trees and regions. The fruit I harvest around the West Wyalong, Rankin Springs region of NSW have minimal sweetness, with a strong sour over-flavour. The aroma is likened to dry lentils with earthy, fermented tones. The fruit is a reliable source of magnesium, zinc, and iron, along with important levels of folate and Vitamin E. The fruit contains one large nut or kernel, which is sometimes only marginally smaller than the fruit. This nut can be opened with a nutcracker to reveal a light brown kernel with a cream colour interior. They make for good eating, especially when lightly roasted in a warm oven. The kernel is made up of 25% protein and 75% complex oils which were used by native Australians to create powerful antibacterial and anti-inflammatory pastes. Today the quandong is equally valued as a food and as a medicine in treating skin conditions, rheumatism, and toothache and gum inflammation. The wood from the slow growing trees is valued for making traditional bowls – pitti or coolamons.

Early English settlers used the fruit after observing aboriginal usage, to make jams, sauces, relishes, and drinks. Today restaurants use quandong in a variety of ways and the fruit is usually supplied as whole dried, sundried, or frozen.

The following recipes are my favourites and allow my family and friends to enjoy quandongs throughout the year.

20 quandongs, fresh or dried, roughly chopped (Note – if using dried quandongs soak in a little warm water for half an hour, then drain)

Simmer the quandong, chillies in the vinegar with salt and sugar over low heat, until the mixture has become reduced and the quandongs soft and mushy, about 30 minutes.

Test the sauce which should coat the back of a spoon without running straight off.  Spoon sauce into sterilised jars.

Serving suggestions: This sauce can be used as a dipping sauce, with meats, vegetables and seafood. It can also be added to soups, stews and slow cooked dishes.

Notes: Store the sauce in the refrigerator, keeps well for many months.

Bill Semple is very encyclopaedic on the topic quandongs; from a growing perspective, where they grow, preserving, through to using in the kitchen. He has passed on much of his knowledge to me over the last 3 years, as he is getting older, and is no longer able to forage for quandongs in his known locations. The flavour of Bill’s pie is sensational with a good balance of sweetness and tart acidity.

My family and friends love a quandong pie, especially with good espresso coffee.

Bill Semple’s Quandong Pie
Prep time: 25 mins – Cook time: 45 mins –
Serves 4
2 cups of dried quandongs (or substitute a cup of rhubarb)
3 tbs sugar
1 teaspoon cornflour
2 sheets of shortcrust pastry
250 g of apple puree
Note: you could add a star anise to the stewed fruit too for a twist.
Preheat oven to 180 C (or 160 fan-forced).
Rehydrate and stew quandongs in a small amount of water (adding more when necessary) on low heat, in a medium saucepan
Add cornflour, apple puree and sugar. Personal taste to determine how much sugar, add more or less than 3 tablespoons if you like.
Meanwhile: Grease (butter) inside of small pie dish (no larger than a 24cm) and line with 1 sheet of pastry, with overhang. Fully line with baking paper and weigh down with lots of rice (that can be reused) Pre cook base at 180 degrees C for 10-15 minutes, until hard.
Add cooled quandong stew to dish – do not overfill – and after brushing edges of base with milk, cover with the second sheet of pastry. Cut a small “X” at the top to allow air out. Brush top with milk.
cook for 30-45 minutes (depends on how hot quandong stew was when added to the pie dish) at 180 degrees C until quandong stew is just about to break out of top. Put pie dish on a tray in oven in case of a blow out.

Serving suggestions: Greek yoghurt is the perfect accompaniment and espresso coffee is a wonderful beverage to accompany the pie. 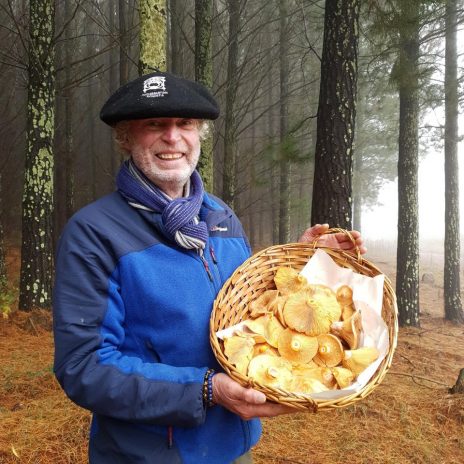 Based in Orange, Ex-teacher and Purveyor of business “The Market Cat” or Robbie Robinson as he is more typically known, has been providing top-quality Central West produce to leading restaurants/ and hotels to Sydney, The Blue Mountains, Canberra, and Qantas since 1985. 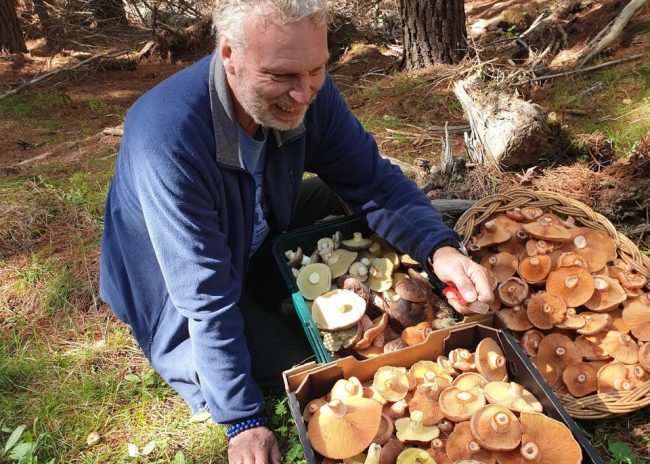 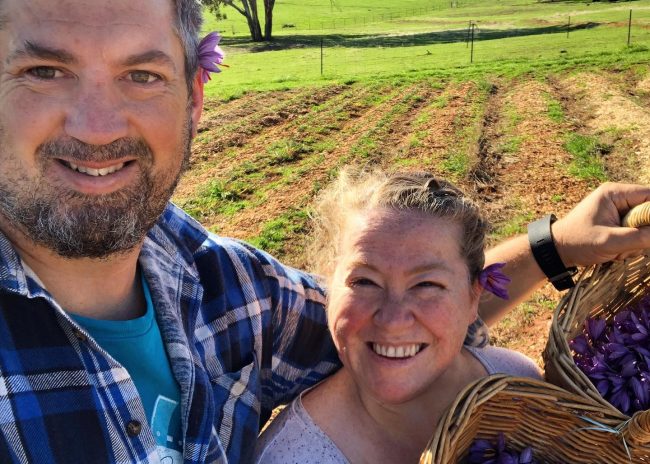 Australian Saffron in the Central West